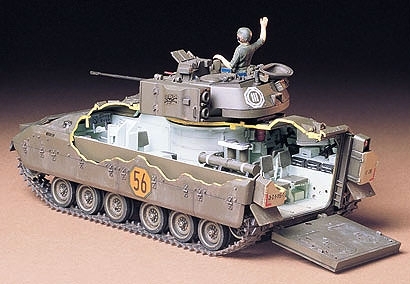 with the introduction of an armoured tracked vehicle fielding a large

bore cannon, by England. This vehicle was dubbed "Tank" by Winston

Churchill, and the innovation has altered the conduct of warfare to this

day. During the second conflict, the mechanization of Infantry was

perfected by the Germans and brought about the name Blitzkrieg. During

that conflict over 3 million military vehicles were produced, and even

thought the tank had considerable advantages, the need for a method of

having the Infantry keep pace with them became a necessity.

After the war, many countries modified existing armoured personnel

was a low budget, trouble free masterpiece and widely used throughout

the globe. The United States needed a "fight from within" mechanized

meet this purpose. With the greater speed and mobility of the M1 Abrams

keep up and support the MBT's. The FMC Corporation of San Jose,

Califoria won the bidding competition and the M2/3's came into being.

Dubbed the Bradley in honor of Omar N. Bradley, a five star general of

World War 2 fame, the M2/3 series offer the sought after flexibility in a

true "fight from within" concept.

by the six, fully equipped infantrymen carried within. Manned by a

coaxially mounted 7.62 machine gun, housed in an offset turret which can

traverse 360 degrees. With a maximum elevation angle of 60 degrees,

the cannon provides aircraft and helicopter protection. A thermic ray

missile system also complements the defensive capabilities of the

Bradley. With a speed of 66km/h on road capability, the M2 IFV is